Morris Kortick: The Story of Our Ark Curtain 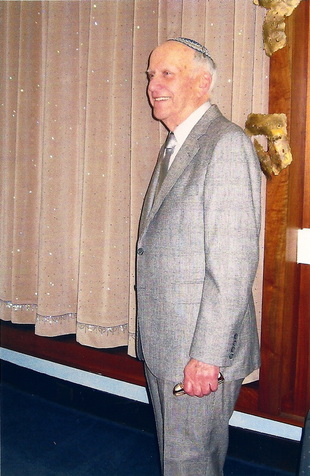 Morris Kortick truly believed that G-d meant for him to design religious art work. The journey to creating Temple Sinai’s ark curtain began when Morris studied as an apprentice toolmaker for several years before starting his own jewelry manufacturing company, Jewel Manufacturing.

Although a member of Temple Sinai for many years, Morris became more active after the death of Edith, his wife of 62 years. While attending his first High Holiday services after Edith’s death, Morris noticed the Temple’s old holiday ark curtain which was worn looking and completely unadorned. Morris always believed that an ark curtain should have some kind of meaningful symbolic design on it so he started thinking about what kind of ark curtain he could make for the Temple.

While listening to Rabbi Peter Stein’s sermon that day, Morris heard the Rabbi quote from Genesis 15:5 where G-d says to Abram, “Look now toward heaven, and count the stars, if thou be able to count them…So shall thy seed be.” Morris realized that Swarovski crystals shine like stars and he thought to himself, “That’s creepy. It’s like G-d just told me the answer.” After researching the appropriateness of using constellations on an ark curtain, Morris learned that the Jewish people had identified constellations even before the Greeks had. In fact, some constellations are even mentioned in the Bible. Jews also have a long history of navigating by the stars and some even believe that Christopher Columbus’ navigator was Jewish. Feeling satisfied that his ideas had a strong foundation in Judaism, Morris began designing his first ark curtain, the one that was used prior to the current ark curtain.

When he completed that first ark curtain, he learned that he had used 14,712 crystals on it. He wanted to know if that number had any religious significance so he divided it by 613, the number of Mitzvot in the Torah, and he found that 613 multiplied by 24 hours in a day equals 14,712. As Morris explained, “Is this not G-d’s hand?”