July 1979
Rabbi George Astrachan was installed and served until retirement in 1999.

January 1958
Ten families met to discuss the formation of a temple for the suburban area.

"A Remembrance of Things Past" 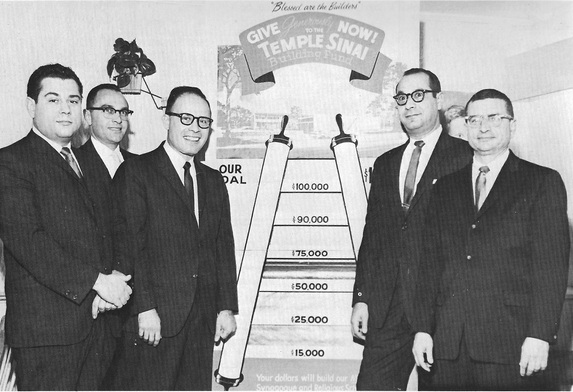 Temple Sinai Building Fund Committee, circa 1960. From left to right: Skip Weingeroff, Norman Bienenfeld, Al Goodman, Al Bensusan, Oscar Davidson. Note that the fundraising goal to build the Temple was $125,000.
On the occasion of the Temple's "Silver Anniversary" in 1983, Edith Grant created a book of memories from the congregation's first 25 years. The book includes this description of the Temple's founding:

It is our pleasure to ask you all to join us as we travel through a lane of recollection, with a nod of understanding to Marcel Proust as we refer to this yearbook as "A Remembrance of Things Past."

Some twenty-five years ago, the Jews of Rhode Island lived primarily in Providence. Those who did not, resided here and there in the communities of Cranston, Warwick, and East Greenwich. Many of these Jewish families were unaffiliated with any congregation. So, in essence, a vacuum existed. The need for Jewish personal relationships, as well as the need to express one's Jewish commitment were to be the prime considerations that dominated a soon to be evinced creative spirit.

As some of you reading this yearbook may recall, Dr. Al Goodman called his cousin Murray Miller, and said, "Let's start a Temple." Dr. Goodman had spoken with tribes at Beth Torah in Cranston, Temple Emanu-El in Providence, and to Rabbi William Braude of Beth-El. Barbara Miller wondered if a momentous undertaking of this kind were possible, as the winter of January 1958 loomed ahead.

The first order of business was to seek out like-minded Jews – whose religious, social, and educational needs would be served by a Reform synagogue. After initial discussions between Dr. Goodman and Dr. Miller, their respective friends were called to a meeting at Allen White's house. Where aspiration, conviction, and enthusiasm are concerned, the idea of a Reform congregation in the suburbs took hold with alacrity, and these couples decided to actively pursue their collective dream. An advertisement was placed in the Herald on the 7th of February 1958, and this ad requested all those interested in a new Reform synagogue to call Allen White and attend a meeting at the Nelson Aldrich School in Warwick, where Rabbi Albert Baum, Director of New Congregations of the Union of American Hebrew Congregations was the main speaker.

Temple Librarian, Mrs. Edith Grant
From whence came the support? This Temple did not grow fully-formed as the mythological goddess Venus painted by Botticelli. No, not at all. Sources of support sprang forth from many quarters. Temple Beth-El lent the Torah and prayer books. Rabbi William Braude gave advice, the UAHC sent written recommendations, rabbis for services and gave invaluable guidance. Churches in Cranston and Warwick offered the use of their facilities, and school space was rented at the Garden City School. Baking for the Oneg Shabbats and other functions was done by a constantly supportive and rotating group of women soon to become the Sisterhood, while carrying chairs, setting up for services, and bringing the Torah fell to the men who became the Brotherhood. An ark was needed for the Torah and Arnold Fellman built it and carried it to Greenwood Hall for the services over the years Sinai used those facilities.

Within that first year, a part-time rabbi was engaged, Rabbi Robert Schenkerman who came each weekend from New York. According to various reminiscences, Rabbi Schenkerman advised that he could purchase a Torah in New York for $300. Oscar Davidson and Arnold Fellman were to be a committee to raise these funds to defray the cost of Sinai's first Sefer Torah. However, they both contacted twenty-eight members and said "Give me $10 for the Torah." To this day I understand, they both have heard the question "Why didn't you ask me?"

By March of 1959 the Board of Trustees was granted the right to not only seek a full-time rabbi, but to negotiate for a site for the establishment of a building to become Sinai's permanent house of worship.

In May of 1960 an option on 11.6 acres of land at Meshanticut Green was taken. The location seemed most suited to the present and future members living in the Cranston, Warwick and East Greenwich communities.

It took just three Rosh Hashanahs of prayer for good years to reach the auspicious date of the fourth of June 1961 when ground breaking ceremonies, attended by state and civic officials and rabbinic leaders took place.